Generally speaking the scaffolding market place is divided in to two approaches to provide access and support to work activities.  Firstly, what is widely known as Tube & Fittings and secondly System Scaffolds.  Both applications are in wide use in the UK and both are aimed at servicing the same market.  It is often stated T&F applications are a peculiar UK solution while in Europe it is perceived the market has more widely adopted the use of proprietary System Scaffolds.  This may well be true, however, there has been a general industry trend over recent years in the UK to move towards System Scaffolds and a general reluctance of scaffolding companies to adopt them, although it is recognised there are regional differences.

There are a number of proprietary systems which are widely held in stock and utilised within the UK and the more common varieties are:

Largely they work along the same principles of utilising modular standard components which offer flexible arrangements with rapid assembly.  The key to system scaffolds is they often have snap-together connections which can become load bearing by the insertion of a wedge or the hit of a hammer.  One of the key advantages of these systems is the well documented rapid installation time due to large modular components which do not need to be tightened with nuts and bolts and can be erected by arguably lesser trained / qualified scaffolders.  Due to the investment made in these systems, there is a huge catalogue of available bespoke components to overcome the most common access requirements, such as, moveable hop-up brackets, battens for decking, corner returns and variable bay lengths to mention but a few with the aim of providing total flexibility for the overall site geometry.  In addition to standard façade access solutions there has also been a great deal of development in ancillary scaffolding applications such as, modular staircases, loading bays, protection fans, temporary roofing systems and beam applications.

One of the greatest drawbacks for any scaffolding company is the capital investment in these systems and the re-alignment of staff cultural perceptions in their use.  Many scaffolders in the UK do not hold system scaffolds in high regard, although this is more likely to be as a result of frustration with their use rather than the system itself.  Often system scaffolds have been incorrectly designed for the project in hand or the variety of stock held by the company simply isn’t flexible enough to resolve encountered problems.  Perhaps not surprisingly, a scaffold company might not make what could be significant investments in equipment if they only get used a couple of times?  While the catalogue of available components can be very impressive with a widget or gadget to overcome every geometric encounter, it is often only the larger players who can realistically afford to invest and deploy them.  Where small to medium companies have only made limited investment, this can often result in scaffolders finding their own solution to problems they encounter on site by reverting back to what they know – Tube and Fittings.  In fact, it has been noted on some projects, as a consequence of deploying incomplete system scaffold stock flexibility, the installers have been handicapped to progress in the way costed and planned.  Ultimately, they install so much additional T&F in order to make the System Scaffold compliant it may have been quicker and easier simply to have used T&F in the first instance. Advantageously system scaffolds such as Layher, are manufactured using the same external diameter as the 48.3mm dia tube used within T&F and hence is compatible with the typical fittings used, allowing T&F modifications when required. Figure one shows and example of a T+F modification to a system scaffold.

It should equally be noted, when used in the correct application and priced against the correct job, system scaffold can provide huge programme and cost benefits the project.  The scaffold contractors who get this right can leave their competitors behind! 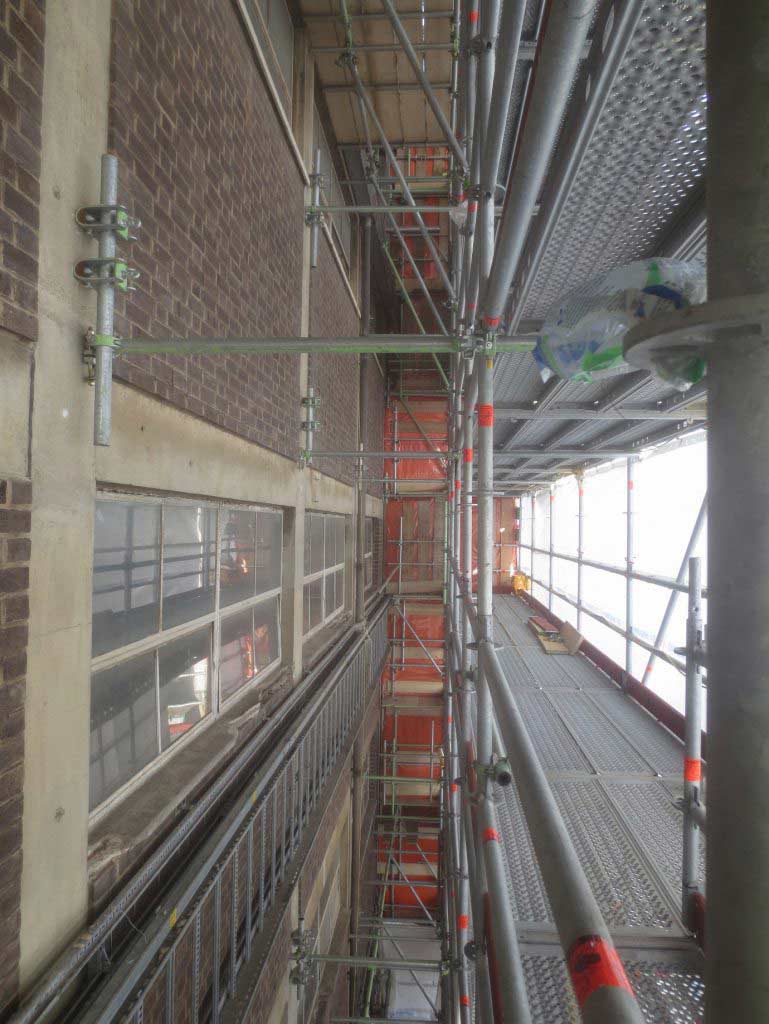 Figure 1 – A Tube and fitting adaption onto Layher system scaffold

Getting it right is the key aspect to both approaches.  Unless specified as a System or T&F solution it is often the experience of the Estimator who must choose which approach to adopt and this is where it can go wrong.  As with all trades, Estimators come in all shapes and sizes although they are often non-technical.  Being non-technical can be a benefit and a liability.  Most Estimators have worked their way through the ranks and have often many years of hands-on experience of scaffolding erecting.  They can often approach a project with enough experience to, on the whole, allow and price for the final engineered solution.  Irrespective of which component solution they adopt, they are often measured on targets of securing contracts and often do this with little or no interaction with any technical support.  Some organisation in a drive to get higher usage from certain stock lines may apply pressure to win contracts with, for example, System Scaffolds.  When a black and white approach to estimating and measuring scaffold area installations is adopted, System Scaffolds are always likely to come out cheaper and quicker when measured directly against T&F.  However, clearly, if the wrong approach is adopted by the Estimator the scaffold company may find they have secured a contract at the wrong price.  Unfortunately, many Estimators are not overly familiar with the lines they are pricing on a technical level, and it is these technical requirements of System Scaffolds over T&F that may cause the installation to simply be impracticable – or at best overly complex and modified to satisfy the technical requirements of the System Scaffold.  It is however too late at this stage.

Bearing capital outlay and availability of kit in mind, where system scaffolds are still growing in the UK, some of the less common brands attempting to break into the market do not have all the components stated in their product manual readily available. It is therefore essential that your designer has the product knowledge to design with components that are available. Suppliers can be checked in advance of design to check this and at IDH we recommend that these checks are undertaken if using a less popular system.

Good product training and familiarity of both T&F, the System and available components you are holding in stock is the key to winning the right job at the right price.

Unfortunately, it is common in many companies not to get technical advice at tender stage.  It is common for companies to secure contracts and effectively make a commitment to which solution they are going to adopt before approaching designers for what is seen as the next phase in a scaffold project – get a design done.

By this time designers have little influence over which solution can be adopted and their hands effectively become tied in that they have to make a square peg fit a round hole.  No designer enjoys this scenario although most have been there.  It is only a matter of time before the inevitable “Why have you got all this additional kit in there” discussion arises.

Conversely, it is not uncommon for designers to look upon secured T&F schemes and automatically realise a system scaffold solution would have been a better solution.

It is recommended early involvement of designers in the pricing phase can have a dramatic influence on stock utilisation and profitability.

Unfortunately, many Clients are also completely unaware of the advantages and disadvantages of each scaffold solution and become cost led rather than best solution led.  When presented with two differing quotes of dramatic cost difference but which appear to offer the same solution, it is only the very experienced Client who will ask the right questions.  As most scaffolding contractors will point out, most Clients treat scaffolding packages as an inconvenient necessity to enable the important package they are really concentrating on – such as cladding.

Scaffolding on any project should be treated and managed as a stand-alone package – equal to a permanent installation package.  Furthermore, it is good practice for the Scaffold Package Manager to instigate early engagement of the scaffold contractor and insist on the early involvement of the Scaffold Designer.  If the Client has any hope of the scaffold package coming in on budget and avoiding a raft of unforeseen variations they must ensure all scaffold designs are also reviewed and accepted by those who are to use the installation.  Only the Glazer, Bricklayer, Stone Cladder know exactly what offsets and lift levels would best suit their works so they should be reviewing the scaffold design and commenting on changes and requirements.  If they choose not to then later request an adaption, the liability for payment becomes clearer.

It is not uncommon practice for less than scrupulous scaffold contractors to price what is requested in the specification at a low rate if they believe the Client is not on top of the package and there would be an opportunity to recover costs and additional profit through adaptions and variations that could have been avoided had it been planned – adaptions and variations which are only too recognisable to a scaffold contractor who undertakes these structures on a weekly basis.

The following table identifies circumstances where one approach may be more advantageous over the other.

In terms of health and safety, system scaffolds are very much advantageous. Tube and fitting scaffolds have multiple couplers and fittings required to secure tubes and boards in the anticipated arrangement. System scaffolds however are designed and manufactured with inbuilt connections, (for example the Layher wedge shown in Figure 2) omitting the need for of several loose fittings. 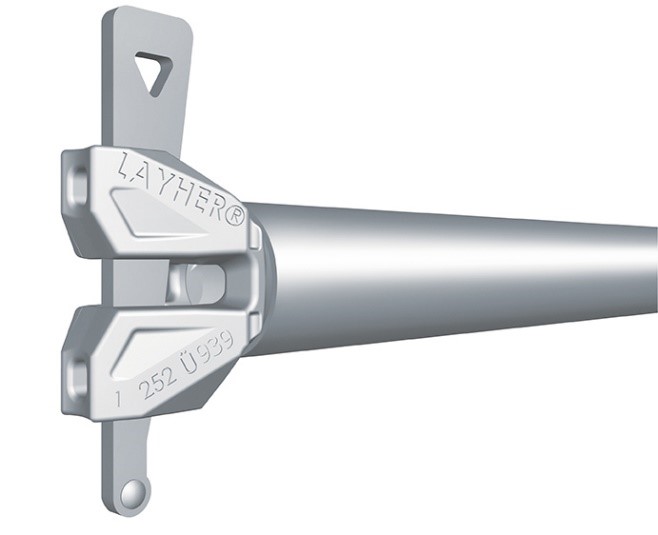 In the case of figure 2, the end of a ledger or transom sits above and below a rosette (welded to standards at 500mm centres or clamped on to secure tubes and levels between the 500mm centres). The wedge is driven through with a hammer to secure in place. Note the wedge cannot become separated from the tube, and hence there is only one element for a scaffolder to keep hold of prior to it being fixed in place.

Tube and fittings scaffold has been developed in recent years with modular components designed with multiple advantages. TG20:13 compliant structural transom units, such as Readylok consist of a transom with a standard and ledger connection inbuilt at each end. These come in lengths to suit 4 board and 5 board wide scaffolds, advantages are:

Extendable (sometimes known as telescopic) transoms are also on the market. For applications where the scaffold is required to be adapted at a certain stage of a project (for example, to facilitate brickwork install following inside boards set out to the frame) these are very beneficial.

The tying of a scaffold is typically a time-consuming part of the erection process. System scaffolds generally require a greater number of ties over a given area to achieve a similar standard axial load capacity for a tube and fitting standard, when erected to similar lift and bay dimensions. Ledger braced tube and fitting scaffolds tied as per the available tie patterns within TG20:13 generally provide higher standard axial capacities with a smaller number of ties to area ratio.

The successful addition of modular components into tube and fitting scaffolding backs up the advantages of using system scaffolds in the right situation. In terms of speed of erection and health and safety, they can be levels above tube and fitting scaffolds. Tube and fitting scaffolds are less restricted in terms of levels and sizes and can be used in non-uniform situations where a system scaffold would not be viable.  It is advantageous to for the scaffold contractor to consult with an experienced scaffolding designer at tender stage, to get a technical view on whether the proposed works are more suited to a T+F or a system scaffold. As this text has discussed, different types of scaffold solution can suit different types of equipment. Understanding the type of scaffold that is best suited can have a large positive effect on profitability.