Rebuilding of the Five Arch Bridge

Painshill near Cobham, Surrey is an award winning 18th century landscape garden with iconic follies, which attracts over 100,000 visitors annually. The garden was originally created by the Hon. Charles Hamilton between 1738 and 1773, based on Renaissance art and his European expeditions. However, the park fell into disrepair and in 1981 the Painshill Park Trust was formed to restore the gardens to their former glory, with an aim to preserve the history and heritage of the original design.

Through funding obtained from the Lottery Heritage Fund and individual donations, the Trust has managed to tick off the restoration of The Gothic Temple, The Crystal Grotto and The Bacchus Temple. The Five Arch Bridge has also been restored, a project which IDH were involved with. 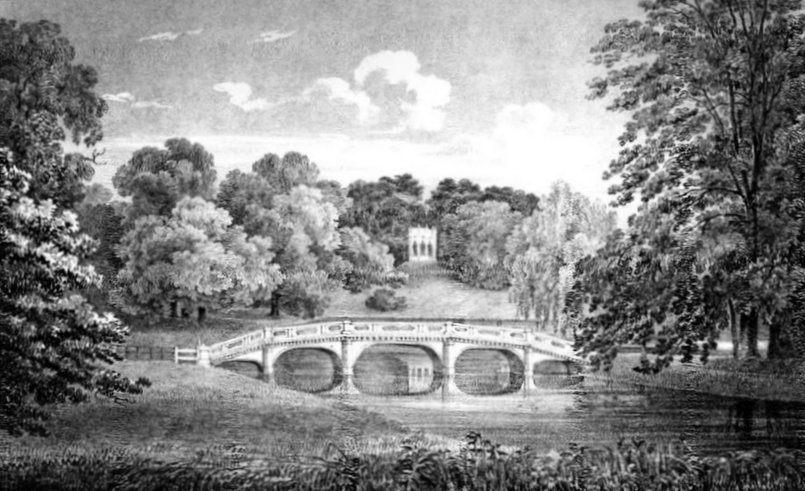 The original Five Arch Bridge was created some time in the middle to late 1760s, and remained in place until the early twentieth century. It was constructed of wood and rendered to look like stone. Unfortunately, by the late 1970s all that remained were the abutments.

To bring it back to life, detailed architectural designs were created by Acanthus L W Architects and planning permission sought. IDH were engaged by Valley Builders Ltd for the design of the formwork to re-create this bridge in all its splendour. The bridge was designed in white reinforced concrete with a feature finish to imitate the original stone-like bridge. It was a requirement of the design that the final appearance would not show the ply finish associated with traditional RC jobs, and great attention had to be paid to forming the traditional arch forms. 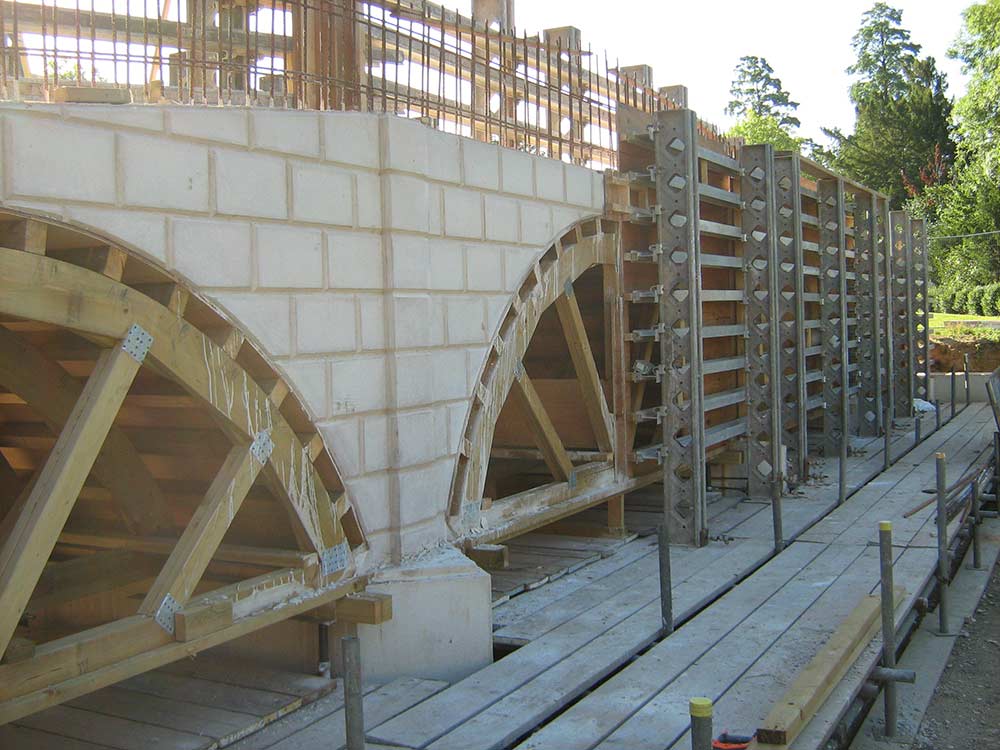 This was a job that could not be rushed, operating from marine deposits and piled foundations, a flat scaffold deck was initially provided for access and then later the support for the arch form itself. The design had to take account of, and limit deflections in all components, and the pour rate and sequence planned to minimise out of balance forces. 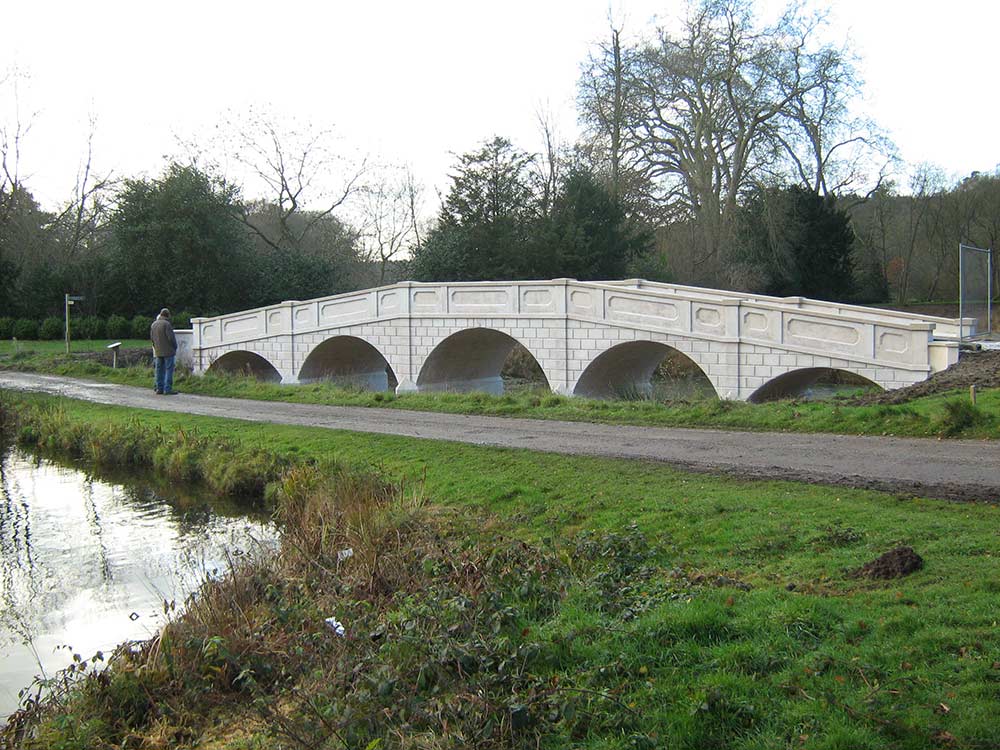 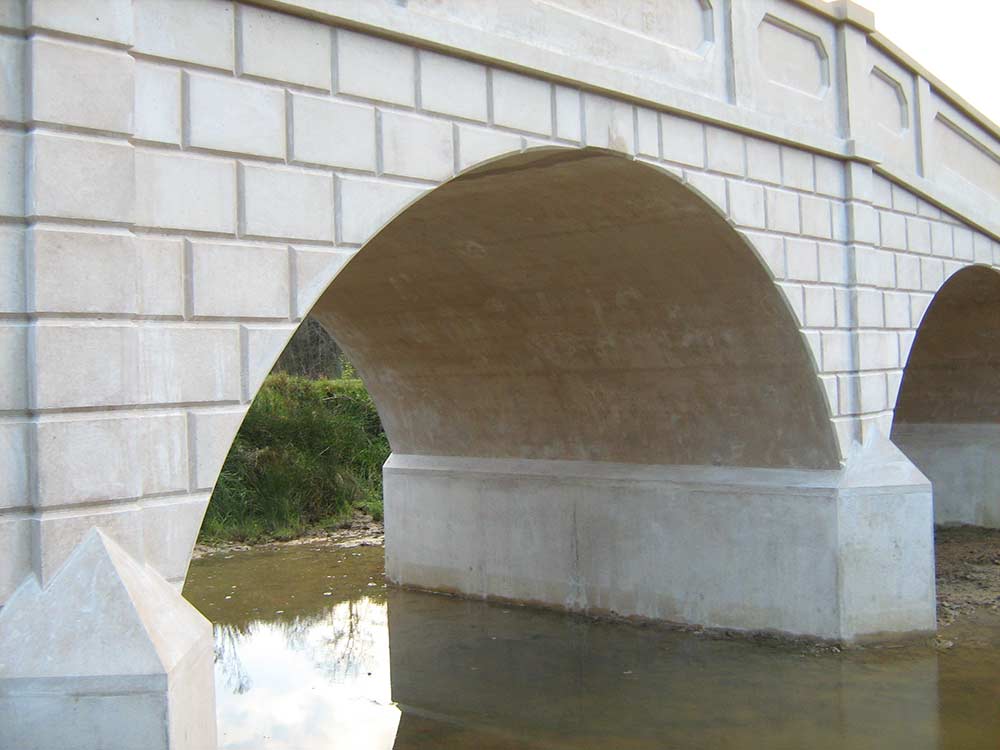 The arch form itself did not suit modern steel forms so was designed as a half cart-wheel simply supported from the piers either side. Congratulations to Valley Builders and their craftsmen who created this stunning modern form!

The rebuilding of the bridge has not only allowed water to flow freely through the entire lake again but has also restored Charles Hamilton’s long lake vistas. Its prominent position confirms that it was a significant feature in Hamilton’s original vision for the gardens.