IDH was recently briefed to produce a fabrication model for a new access ramp and footbridge at Newport Train Station, the second biggest station in Wales. We were approached by Pro-steel Engineering Limited, who had been appointed by Alun Griffiths, alongside consulting engineers Cass Hayward on behalf of Newport City Council.

The new bridge signalled the end of lifespan of the existing underpass, which served as a pedestrian route from the north side of Newport to the south. The previous underpass was set for permanent closure following the completion of the footbridge.

As a key part of the project, two major sections of the city needed a new and improved link. A lengthy diversion was needed to access Devon Place and Queensway, with Bridge Street being the primary overground access point. The existing subway had been plagued with anti-social behaviour concerns over recent years and was not accessible via wheelchair.

Planning permission was granted by Newport City Council in March 2020 when works began. The plans formed part of a £4million investment from the Welsh government.

The entire structure is formed of an intricate multiplex of platework which included large radii, parabolic pre-cambers, and numerous curved plates, most of which were also sloping in one or two directions. By utilising design reference models supplied by Cass Hayward, we were able to accurately detail the geometrical data that would otherwise have been difficult to communicate using two-dimensional detailed design drawings alone.

Through continual consultation with Pro-steel Engineering, we were able to collaborate and identify fabrication and transportation restrictions. This information was fed back into the model and developed into erectable phases with each individual phase marked with unique identifiers so that they could be isolated and released for fabrication without having cross overs with subsequent phases. This also gave IDH the advantage of working on separate phases concurrently without having conflicts in the model.

One of the main obstacles we came up against was being able to convert information in the 3D environment into workable data for the fabricator, taking the curved plate geometry and extruding that information so that Pro-Steel had a flat piece of steel plate to work with. For curved plates a big advantage was the ability to use the “lofted plate” function for exporting “NC” and DXF data files.

A major obstacle we had to overcome was exporting the dual sloping plates that were both curved and arced as a flattened member so that the NC data could be utilised. IDH consulted with Tekla support to ascertain whether it was feasible. Fortunately, a solution was found which involved a two-step process whereby the plates were traced over, using the built-in macro “Triangles generation”, and then applied to the “Unfold surface” macro.

This was a great result for us and our client, as Pro-Steel Engineering was able to then develop the flattened member in the workshop to the desired final shape.

We experienced an array of technical challenges along the way, however the project teams overcame all obstacles. The Tekla Structures programme was an integral piece of software for delivering this project and it dealt extremely easily with the many problems we encountered. IDH worked with extended programme durations and was still able to deliver on key milestones such as the planned Christmas day rail closures to facilitate the installation of the two main bridge spans. 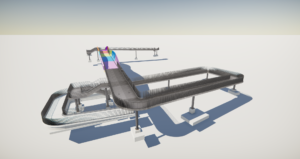 With the two main bridge spans and Devon Place walkway now installed, we can finally start to see everyone’s hard work come to fruition. The footbridge will soon be open to pedestrians, wheelchair users and cyclists and will form a vital crossing over the Great Western Mainline Railway route through South Wales.

The whole team is incredibly pleased with the result of the footbridge and is a testimony to the skillset of ALL parties to deliver.

The footbridge works will be completed by all parties involved by the end of 2022.